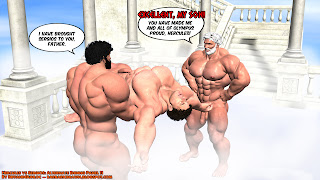 With a belly full of Hercules' potent seed, Sergios fell to the ground and passed out.

Standing there awaiting them was Zeus, the father of gods and men.  The muscular god king was nude as he greeted his son and his new consort.

"I have brought Sergios to you, Father," Hercules spoke, holding the mortal-turned-immortal man out like an offering.

"EXCELLENT, MY SON!" Zeus boisterously spoke!  "You have made me and all of Olympus proud, Hercules!"

The godling placed Sergios by Zeus' feet and was returned to Earth.  The champion would need to rest before he set out to tell the bards and wise men of his battle with and victory over Sergios.
Posted by Lucky Stallion at 2:19 PM