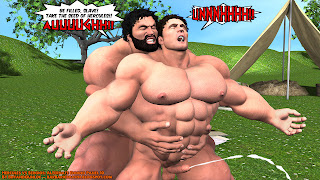 He cried in pleasure as ropes of hot, white semen burst from his bouncing manhood!  It coated the ground with his hot essence and drained his heavy orbs of their humble offering to the mighty Hercules.

Sergios' hole constricted and squeezed tightly around Hercules' cock, forcing it, too, over the edge!  The demigod managed to grunt, "Be filled, slave!  Take the seed of Hercules!!" before he flooded the muscular butt of the defeated human.

Hercules held him close to his body as he came.  With every slow thrust, he groaned and grunted and savored his last few moments that day with the man named Sergios.
Posted by Lucky Stallion at 8:26 PM