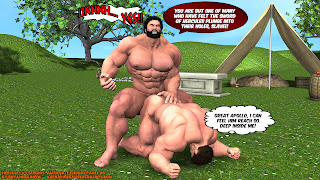 Sergios knelt in submission and raised his butt into the air.  He hung his head in shame as he felt the thick, leaking head of his master's cock rub up and down against his puckering hole.

"UNNNH..." Hercules groaned in arousal as he pushed forward, easily defeating the last of Sergios' defenses.  He was in!  "YES!!" the demigod shouted in elation!

With his pride as a man at stake, Sergios tried to keep quiet, but the girth of Hercules' legendary cock stretching him out soon forced him to moan.

Inch after inch of his master slid into his hot insides, filling him in a way no other man had ever been able.

"You are but one of many who have felt the sword of Hercules plunge into their holes, slave!!" the son of Zeus taunted in a booming voice.

Finally, Hercules' godhood speared Sergios to the hilt!  He placed a hand upon the human's back and began a hard and steady fuck.

Sergios' moans increased with every thrust.  He quickly realized that all of the tales he'd heard about the sexual heroics of Hercules were true.  The godling knew how to fuck!  Hercules' cock wore at Sergios' resolve until he eventually found himself pushing back to meet its advances.

"Great Apollo," he thought with horror at his actions, "I can feel him reach so deep inside me!"

Hercules' thrusts grew more and more savage with every minute that passed.  The demigod's hips slapped against Sergios' butt, and the heavy balls of the two men met repeatedly.

Hercules' massive ego inflated and his chest swelled with pride as he broke Sergios sexually.  This was what he wanted ever since he confronted his target on this very land.  None were a match for the great Hercules!
Posted by Lucky Stallion at 12:00 AM