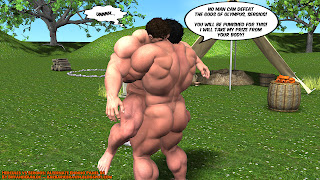 Sergios slumped like a newborn into the arms of the man who now stood as his conqueror.  He rested his face upon Hercules' hot and sweaty shoulder and groaned in pain.

Hercules held his slave gently and began to massage his tender back.  The human moaned softly at the incredible sensations his master was giving his sore muscles.

But Hercules didn't want his conquest to believe that his ordeal was behind him.  Their fight was over, but there would be another price to pay for his failure -- a price that all men who surrender in battle must pay.

Hercules placed his mouth next to Sergios' ear and gruffly spoke, "No man can defeat the gods of Olympus, Sergios!  You will be punished for this!  I will take my prize from your body!"
Posted by Lucky Stallion at 5:13 PM