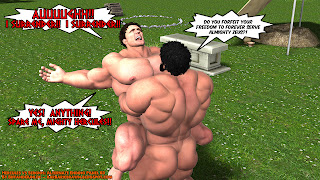 Unable to withstand the terrible bearhug that threatened to break his back, Sergios gave into the demigod!

"AUUUUGHH!!" came his cry of defeat and the halting of his struggle!  "I SURRENDER!!  I SURRENDER!!"

And with his word binding him to his fate, the muscular human was conquered and enslaved!  Booming thunder rumbled from above, signaling Zeus' pleasure with the outcome!

Hercules felt pride in his chest as he held his defeated foe close to his superior body.  They basked in the heat of battle that can only two men can know.  And regardless of the outcome, both were satisfied.
Posted by Lucky Stallion at 6:04 PM