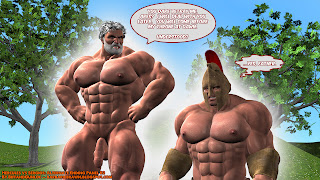 Zeus turned his angered expression toward his other son.

"You dare betray me, Ares?" he spoke with contempt.  "I will deal with you later.  You will come before my throne at dawn."

Ares knew what would happen.  A rare chill seized the manly god of war.

"Understood?" Zeus asked, his voice like a rolling thunder.

Instantly, the two studly gods vanished from the battlefield and left Hercules and Sergios as they had found them.
Posted by Lucky Stallion at 1:56 PM