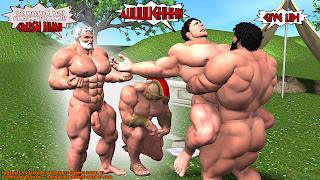 Just before Ares, the god of war, could reinvigorate Sergios to claim victory over his brother, Zeus, the king of gods and men stepped in!

Without the aid of the war god, Sergios felt the full pressure of Hercules' bone-shattering bearhug!  He screamed in agony, totally unaware that two powerful deities of muscle and might were standing right behind him.

"Yes, Hercules!  Yes!!" Zeus shouted in elation.  He watched as his half-human son squeezed their opponent without mercy.  "Force him to submit!!  CRUSH HIM!!"

"GIVE UP!" Hercules snarled, unaware of his father's presence urging him on.

Ares knelt beside Zeus and shook his head in defeat.  Somehow, Zeus found out about his giving the mortal Sergios ambrosia.  Ares would find out who told Zeus and make them pay!
Posted by Lucky Stallion at 4:04 PM