New at Patreon for September

Hey there, guys.  I recently posted my second batch of images for this month over at my Patreon page. 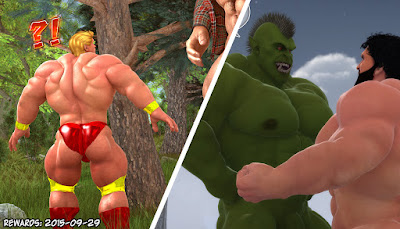 Paul Bunyan is a character I've been wanting to do for a while now and I thought it might be fun to have my Soviet stallion, Alexi Volkov, wander into his forest and encounter the giant stud.  Is he dreaming...?

Also in this reward set is The Eye of Zethimia.  A massive, rare, and beautiful jewel is set in a massive stone skull called Zethimia, the 'eye' of which is said to contain a certain amplifying power.  Overlord Krag, leader of the orcs of Grohmah sent his massive, bodybuilding orc known as Gorg to take it for their cause.  But the half-god known as Hercules was sent by Zeus for the same purpose!

You can find these early and at high res / image quality at my Patreon.
Thank you very much for your support!
Posted by Lucky Stallion at 12:55 AM 4 comments

Pythons Rule is one of my older, smaller stories from early 2013.  It involves two members of the Pythons gang, Butch and Troy, and their encounter with Officers Ronnie and Ken.

One of the patrons at my Patreon had wanted to see Ronnie and his partner bottoming, so I thought back to their first battle and remade Pythons Rule for you guys! 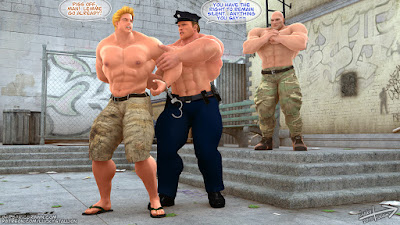 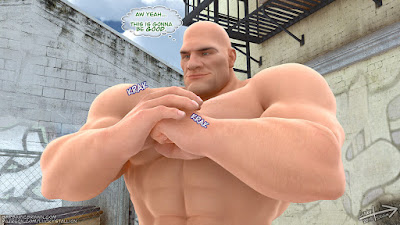 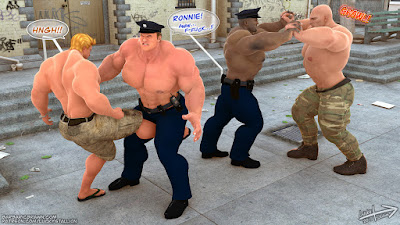 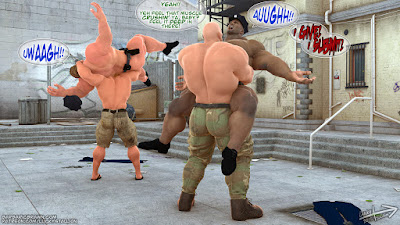 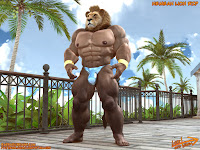 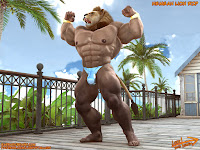 This is my loose interpretation of the Nemean lion from the Hercules mythology.

This version of the lion was cursed into his current form; body, mind, and language of a man, with his former fearsome leonine head; before Hercules came to find him. Getting some hard work done on the next big story for my Patreon, Vengeance Denied: Part 2. This is The Boss, relaxing with two of of my other characters (from Gym Bunny Posedown), who make another cameo appearance here.  The Boss is the man who runs the criminal organization known as the Red Scorpions in the city where this tale takes place.

I’m almost done with the renderwork.  Probably about… five or so more left to go.  Then I'll QC it and finish the postwork before getting to work on some more art for the single images batch.

These all should go live on or around this Sunday!

https://www.patreon.com/luckystallion (thanks so much for your support!)

Posted by Lucky Stallion at 3:25 AM 3 comments

I've been playing LEGO Batman 3 (just finished the main story last night) when inspiration struck from a cutscene involving Lex Luthor with his usual presidential aspirations.  I had Superman call out Lex's name in his arousal fantasy in Heroes Bound, and decided to make a version of him.

He's finally managed to subdue the Stud of Steel with green kryptonite and crush the remainder of his defenses with pink kryptonite, infatuating Superman beyond the point of no return.

I tried to capture the typical political propaganda feel, hopefully without making it too overbearing (versions without the ribbons can be found at my Patreon).

So… can Lex count on your vote? *grin*

https://www.patreon.com/luckystallion (thank you for your support!)
Posted by Lucky Stallion at 11:31 PM 5 comments