While I continue to do research on Barbaric Brawn's new home, I wanted to share with you guys some work I've done on the Naja/Ylandarr story.  This is the Hall of Man, a sanctum where the elders and leaders of the humans meet to discuss important matters. 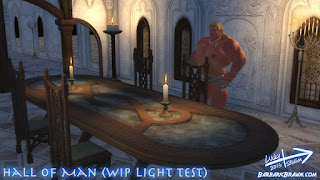 The scene hasn't been fully built yet (the outside is mostly incomplete) but I spent some hours building the lighting indoors and testing it out in various angles.  I put Ylandarr in there to see how one of the models would look in the lights.

I also began work on one of the other human men of the tale who has yet to be named.  I have two others in mind for smaller roles, and likely need to create a few more for background purposes.  And then I need to work on Prince Naja's brethren.

Also, I noticed that I had sold a few PDFs today.  I wanted to say thank you to everyone who's purchased from my Lulu store.  I'm really going to be needing this money to pay for hosting of the new site and the tools to build it.

Thanks so much, everyone.  I do and always appreciate it.

P.S. -- My friend Alex has opened up two blogs of his own dedicated to his awesome wrestling stories normally found at Sidelineland.  You can find the links to Alex Miller's New Stories and The Cave in the Links section here!
Posted by Lucky Stallion at 10:32 PM