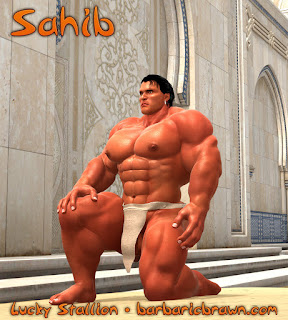 Sahib was the only son of an apple merchant in Al Fatih, the large and peaceful city that stood within walking distance from King Fatih's palatial home in the sand-surrounded kingdom.

Even early in life, Sahib was always eager to make his parents proud.  He would run around the city doing odd jobs for spare change to help support his family.  He soon became known as Sahib the Swift, the boy who'd race across the entire kingdom to deliver a basket of freshly-cooked lamb before it became cold.

Not two days after his 20th birthday, Sahib noticed a contest put forth by King Fatih himself, offering a lifetime position as guard of the palace and a very generous salary.  Sahib -- full of confidence in his abilities and eager to prove himself worthy to not only his parents, but his king -- applied for the job.

For one month, men of various ages were pitted against one another in several feats of strength and resolve.  In several key contests, Sahib came out on top, amassing points and rising high in the ranks.  Man after man began dropping out of the competition when it became clear that they didn't stand a chance.  With only two weeks remaining, there were only three men left in the running.

Sahib, Amjad, and Kadar were placed in a hothouse, forced to endure scorching-hot temperatures in a sealed enclosure with burning coals surrounding them.  Sweat poured from their nude bodies, and their chests rose and fell rapidly as they struggled to engulf the precious little oxygen afforded them.

Amjad began to feel faint.  He felt as though he would soon pass out!  With fear that he would die in the hellish enclosure, the man struck the weakened emergency boards and broke through, instantly disqualifying himself.  A rush of fresh air entered the small room, reinvigorating the final two.  Kadar smirked at Sahib and licked his lips, eager to destroy this younger man and become the king's new guard.

"Surrender to me now and spare yourself the humiliation of defeat," Kadar grunted, running his hands down his massively-muscular pectorals.  The sweat that somehow remained upon his tanned skin watered the sandy ground below.

But Sahib didn't say a word.  He merely returned home and rested up for the next event.

Having accumulated 45 points of valor, Kadar was in the lead.  With only 40 points to his name, Sahib knew that he would have to win the upcoming challenge and force a tie-breaker or Kadar would take the prize!

When it was announced that the final event was a sprint, Sahib was elated.  Kadar knew of the younger stud's reputation as Sahib the Swift, but that wouldn't stop him.  He would crush this whelp and his dreams in the palm of his mighty hand!

But unfortunately for Kadar, Sahib's natural agility and stamina easily won him the race and evened the score!  King Fatih himself looked them both over and knew that either man would make a fine guard.  But there could only be one.

Kadar and Sahib engulfed each other's flaccid shaft, trying desperately to make the other erect.  The heat of the lustful battle exciting them, both men became hard and throbbed furiously in each other's mouth.

Kadar's tongue slid quickly over every inch of Sahib's leaking erection.  He teased the slit incessantly in an attempt to cause the younger man to lose focus.

Kadar pulled his mouth from Sahib's cock and howled his orgasm into the hot, bright sunlight!  The rugged, older man's meat pulsated and shot its potent seed high into the air!  Afraid it was a trick to get him to stop, Sahib didn't let up.  His tongue continuously licked and lapped wildly at Kadar's puckering hole.

Newly-appointed the new royal guard of Al Fatih, Sahib moved into his new home: the king's palace.  Kadar, ashamed by his failure, left the kingdom in the night, swearing revenge upon the cheater who cost him his grand opportunity.

Sahib would soon meet the black stud named Lusala and Prince Hassan.  The prince, he discovered, was only one year younger than himself.  Hassan took a liking to Sahib and requested that he, like Lusala, become his personal bodyguard.

Deeply honored by the request, he happily agreed.
Posted by Lucky Stallion at 3:28 AM