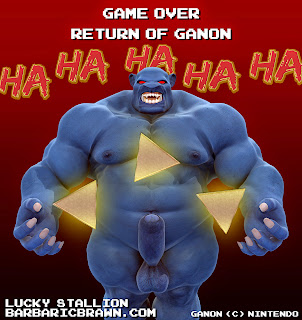 I'm not sure how many of you guys have played the old NES game Zelda II: The Adventure of Link, but if you have, then you know how effing difficult that game can be.  I've been replaying it recently (with the help of save states -- I'm not that stupid), and I've still seen the game over screen a number of times.

Anyway, I was in my studio and fiddled around to see if I could recreate Ganon from the game over screen.  It's not nearly what I wanted, but the big guy's been redone so many times, what's another version of him in the grand scheme of things!  Plus, this one's pretty hot, I think.