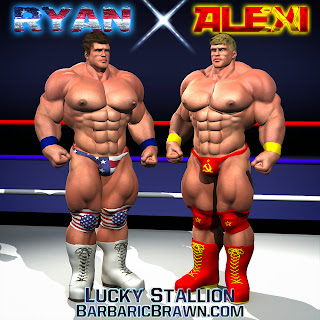 Hey, everybody!  I hope your weekend has been going well!

I've recently been reviewing the Cold War pro wrestling story ("Project D" from before) I had worked on off and on since sometime last year and came to the conclusion that the beginning was... well... kinda slow, boring, and dumb.  So I completely rewrote those early paragraphs and changed them into a pro wrestling tournament scenario where Ryan and Alexi are eventually chosen to represent their respective nations in the big upcoming match. 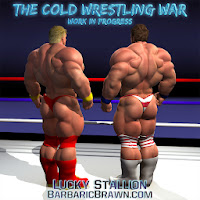 I spruced up Ryan's and Alexi's models here, mostly with the addition of wristbands, kneepads, and boots.  Alexi's face received a couple of minor adjustments, while Ryan's was completely overhauled to give him a more manly countenance.

Some things may change as I write the story, but these promo images are a pretty close representation of what it'll eventually look like.
Posted by Lucky Stallion at 7:16 PM