Yo!  I've been working here and there on a few different projects now, but I can't decide which I should work exclusively on for my next post.  I was hoping that you guys could help me decide!  These are early in development and could look quite different by the time I'm satisfied with them. 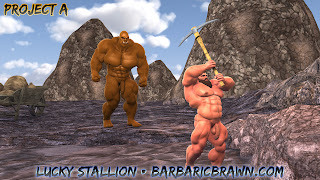 Project A:  My dwarf character, Remgo, has been in seclusion for too long now!  He's currently out in the ore-rich mountains of his homeland, gathering raw materials to help the humans in their struggle against the mighty orcs of Grohmah.  But the greenskins have many allies who favor their rule; these friends have tipped them off to the activity.  Urahg, one of the brown orcs of the region, has been sent to squash and screw the little whelp before he can deliver today's cargo to the humans! 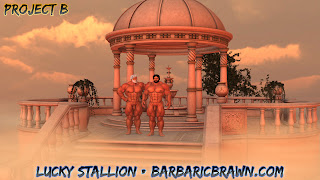 Project B:  Hercules and Zeus return to Barbaric Brawn in a story in which... I'm not quite sure what happens!  I was playing with the rotunda I purchased and thought it was nice enough to evolve into some sort of idea.  Perhaps just the beginning would take place in this area and the rest in another. 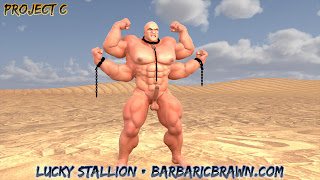 Project C:  Brutus!  I've been working on this beastly, four-armed guy for quite a while now, but I have absolutely no idea what to do with him.  I can't decide whether or not he's a medieval monster or a modern victim of gene splicing.  Before I do anything with him, he needs an identity.  (The desert is just a quick backdrop for his model!) 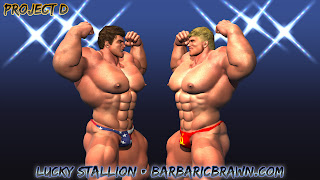 Project D:  My Cold War era pro wrestlers, Alexi and Ryan, who were introduced in November of 2012.  Their story is nearly complete, it just needs a bit more work and then another pass or two to make sure it's polished before I begin render work.


All of these will come in time, but for now, which one would you like to have made and posted before the others?  Thanks for your input! :D
Posted by Lucky Stallion at 3:18 AM