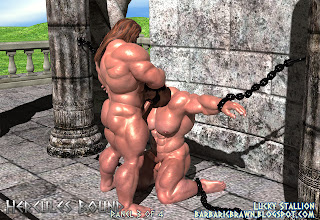 Hercules' struggles to contain his lustful urges finally came to an end.  He no longer cared what Slave King or the two bucks under him thought.  He was still half man, and men had needs, after all.  After resisting for hours, nobody would lay blame on him for finally succumbing to the heat of his loins!

The loud sounds of sucking and slurping were all the four men could hear as Hercules struggled to lift his head and look for the muscle slaver whose fists gave him such pleasure.  Slave King was standing a few steps away with his arms folded across his chest.

"Yes?" he asked, a nasty smile on his ruggedly-handsome face.

"Await me on the steps," Slave King commanded of his disciples.  Aetos and his brother stepped back and watched their master finish his work.

Slave King approached Hercules and pressed his slave's big, sweat-laced pecs against his own.  He grabbed hold of the demigod's ebony locks and pulled his head back to face him.  Hercules looked into Slave King's hard eyes and became intoxicated by their power.  The sun glowed from around the muscle stud's auburn hair, giving him a godly look.  But Slave King was nothing like an Olympian.

"ON YOUR KNEES!!" he bellowed at Hercules, who then dropped without question.  An evil smirk flashed across Slave King's mouth.  His cock throbbed hotly before Hercules' face, a clear symbol of his virility and masculinity.  The scent of this man's groin aroused Hercules like nothing had ever before.

"Do you know what surrender to me means, son of Zeus?  It means that you will be mine until the day I tire of you.  Your body, your mind, and your spirit will belong to me and only to me.  You will do as I say without question.  And my will shall become your own.  Do you understand me, slave?"

"Then suck me, slave, and welcome your new life under the might of the man who has finally defeated Hercules!"

Hercules opened his mouth and willingly allowed his new master to enter him.  With that act, he sealed his fate as the newest and most prized member of Slave King's harem...