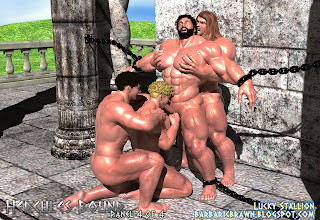 "Mmmn," Hercules moaned, taking more of his master's cock into his mouth.  The fat head of the shaft poked against the back of his throat, but his arousal helped to keep him from gagging.

"Man, this is so hot," Demas said, sitting next to his brother on the stone steps.  "Remember all those stories Father told us about Hercules?  If only the old man was here see his hero now."

"It was worth letting him fuck me," Aetos laughed.  "I'm gonna make him see how it feels," he continued, giving his hard cock a few strokes.  "After Slave King's done with it, his ass is mine!"

"That's enough," Slave King grunted, pulling his slickened cock from Hercules' puffy lips.  He slapped the muscle alpha's face with it repeatedly.  "ON YOUR FEET!" he growled, grabbing Hercules by the hair and forcing him up again.

Slave King moved behind the defeated stud and pressed his cock against Hercules' butt.  His hips gyrated as he dry humped his new slave, holding firmly onto his beefy hips.  Hercules groaned softly at the humiliation.

The halfgod grit his teeth and thrust his massive chest out.  The slaver's cock felt even bigger there than it had in his mouth!  Pain shot like Zeus' thunderbolts up his back and across his entire body.

The sensations within Hercules' body felt indescribable to the tyrant.  The heat that consumed his sword of flesh beckoned him to hilt himself within the sheath of the greatest conquest ever.

"Auuugh, yes...  It is always a pleasure to tear open the untouched holes of proud men, Hercules.  I live to destroy heroes like yourself," Slave King hissed into the demigod's ear.  The victorious stud's heavy manhood drilled deeper and deeper with short, deliberate thrusts.

Hercules could only moan and mewl like a wounded bull as he was driven to the heights of ecstasy.  Never before had he felt such incredible pleasures within his body.  As a man who enjoyed a life of dominance and unrivaled strength, none had ever dared to touch his most sacred of places.  A part of him felt almost happy to have finally discovered the pleasures of allowing another man inside him.

"I feel you sucking on me so greedily, son of Zeus.  Clearly the king of the gods created you with this destiny in mind!"

"Why else has he not saved you?" Slave King grunted, screwing the godling's butt harder.  "It was because you were meant to SURRENDER -- TO -- ME!!"

Hercules screamed in shock as the muscle slaver grabbed hold of his big pecs and began pounding his hole with incredible strength!  Slave King's mighty cock unmercifully plowed him like a man possessed.  The tyrant wanted to prove without a doubt that he was the master of this walking slab of muscle and masculinity.  He wanted to prove that his power and authority over the once-mighty Hercules was total and complete.  It was time for the people to worship Slave King instead!

The halfgod's throbbing cock drizzled strands of clear precum all over the ground below.  The young bucks watched with great pleasure as the proud, masculine spirit of Hercules was worn away by their master.  Every thread of precum that he shed was further evidence of his submission.

"Come and give this bitch a sucking he'll never forget, my sons!" Slave King commanded of Aetos and Demas.  The two scrambled over to kneel before Hercules' wildly-bucking body.  Aetos grabbed hold of his wagging cock and heavy pair of balls, keeping them still enough for him to begin.

"Come on, brother!" Demas laughed as Aetos struggled to wrap his lips around Hercules' fat cockhead.  "Surely you can tame the sword of this big beast."

"It was never this big last night!" Aetos gasped as he came up for air.  "He must truly enjoy having Slave King inside him!"

"TAKE MY SEED!" Slave King suddenly growled, thrusting his cock deep into Hercules' hole just in time to unload his manly essence.  "I AM VICTORIOUS!!" he shouted to the sky as his manhood spurt 11 healthy ropes of seed into the body of Hercules.

Just as suddenly, Hercules' manhood bounced in Aetos' mouth and erupted his own semen down the younger man's throat!  Aetos struggled to gulp down the protein-rich semen of the halfgod.

"Auuugh, yeah...  How's that feel, Hercules?" he asked with a deep grunt.  His hips slapped lewdly against his bitch's butt as he fucked him faster.  "Feel good to be taken by a real man?  Answer me!"

Slave King stood nearby and watched as his two disciples ravaged the utterly-dominated body of the fallen hero.  He savored every moment of Hercules' quivers and cries and knew that neither he nor Hercules would ever forget this day.


And so, the heroics of the incredible Hercules ended with his surrender to the dreaded Slave King.  Hercules' final battle for freedom was lost against a foe whose sinister talents for enslavement far outshined his ability to resist.  It was a tale that would be told and retold from generation to generation for decades to come.

With Hercules as his muscle servant, the tyrant found himself able to achieve conquests at a much greater speed.  Whole villages fell under his influence, and men who aspired to destroy heroes just as the legendary Tamer of Hercules had were emboldened to become a slave king of their very own.

The End
Posted by Lucky Stallion at 2:03 AM