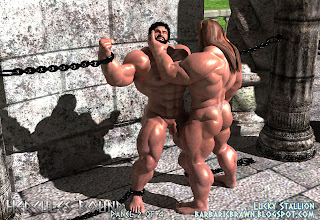 Slave King, unafraid of the power that Hercules is said to possess, casually strutted up to the bound demigod and began the task of appraising the catch.  He quickly realized that this man's body is even more exquisite than he remembered it being.  Slave King's strong, manly hands moved slowly across Hercules' struggling chest, arms, and legs.  He knelt down and grabbed hold of Hercules' flaccid manhood.  The uncircumcised penis was quite hefty in his hand, and the balls that hung low were heavy with seed.

"No..." Hercules moaned, pulling at his chains for freedom.  He spotted Aetos standing mere steps away.  He growled angrily at the golden-haired youth for his trickery.  But Aetos merely licked his lips and smirked back at the godling.

Slave King determined Hercules' big, meaty butt to be flawless.  He squeezed both cheeks in his rough hands and pulled them apart, exposing the hero's hole to the air.  It was clear to the slaver that it had never been filled with a man's cock.  Slave King grunted with satisfaction and gave the cheeks a slap, knowing he would soon change that.

The indelicate touches of the tyrant made Hercules shudder in disgust.  And yet, the way this alpha male handled his defenseless body caused him to feel an undeniable heat within his loins.  He struggled desperately to keep his cock down, lest he be seen as weak to this brute's whims.

"Such powerful muscle," the auburn-haired slaver grunted lustfully as he stood once more.  His cruel fingers gently twisted Hercules' big nipples.  "You truly are the son of Zeus.  Won't you simply surrender to me now and join my harem willingly?  I promise to keep you well.  But your holes..." he whispered lewdly, moving in to kiss the demigod's neck, "they will make sublime sheaths for my man sword."

"Release me, Slave King!" Hercules growled.  He lunged hatefully at the long-haired muscleman, but his unbudging chains held him back.  "I will make you pay for your crimes and free the men you've enslaved!"

Slave King seized Hercules' bearded face by the jaw and squeezed it in his mighty grasp.  The evil stud's strength caught the hero by surprise and subdued his struggles in an instant.  "Not even you, a god among mere men, is without a breaking point.  I will tear you down, piece by piece, and remake you as my finest slave yet.  And when I have finished bringing you to the point of no return, you will beg to serve me well."


Over the next five hours, Slave King and his two disciples subjected Hercules to a rigorous routine designed to break even the most proud and stubborn of men.  The tyrant took great pleasure in working over the halfgod's perfect abdominals.  He sent his balled fists into those twin slabs of muscle again and again.  Hercules' suppressed grunts of pain were like a symphony to the slaver's ears.

As Slave King worked out his aggressions physically on Hercules, Aetos and Demas were tasked to break him sexually.  As Hercules wouldn't allow him near his butt the night before, Aetos enjoyed burying his mouth between the godling's ample cheeks and lapping hungrily at the hot, virgin hole nestled between.  Demas sat in the front and gave Hercules' heavy, sweaty balls a hearty cleaning with his tongue and lips.

Even with Slave King pounding his massive pecs into rubble, Hercules couldn't help but moan with arousal, and his cock finally grew to its full erection!

The hero could feel his will to resist leaving him!  His struggles to break his bonds lessened with every passing minute of the unyielding routine.  The pains in his chest and abdomen mixed with the sexual worship he received, confusing him immensely.  The blows from Slave King's mighty fists soon became just as pleasurable as the sucking and slurping he received from the two bucks on the ground.