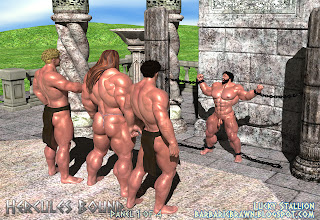 "There he is, Slave King!" Aetos spoke, gesturing toward the bound halfgod, Hercules.  The mighty son of Zeus and hero of men struggled in his bonds, still half-sedated.

"By Apollo..." Demas, Aetos' brother gasped at the sight.  "I cannot believe you have captured Hercules, Aetos!  But it is he in the flesh!"

Aetos thrust his chest out with pride for his accomplishment.  It was far easier than he'd anticipated to bind the man god.  As Hercules strutted through the village, he allowed his many worshipers to look upon his body, laced with sweat from his latest feat of heroism.  But it was the golden-haired youth named Aetos that would claim the prize of his undivided attention.

Hercules made love to the athletic buck under his uncle's apple tree that night.  Hercules rapidly thrust his erection deep into Aetos' hungry hole as the stars cast their light upon them.  Aetos' moans of ecstasy were frequently cut off by the bearded demigod's masculine kisses.  The stud's lips were as sweet as milk and his tongue as strong as an ox.  It wrestled Aetos' own into submission.

Before the break of dawn the next morning, Aetos sneaked off to fetch a special chalice of wine for his new lover.  Unknown to Hercules, the man he had spent the night with was under the employment of the dreaded Slave King, a ruthless muscle tyrant known to have been the enslaver of dozens of men.  Hercules had never managed to find the slaver and bring him to justice.

"Thank you, Aetos," Hercules mumbled as he chugged the large glass of wine past his parched lips.  Aetos watched as Hercules downed the tasteless drugs he'd spiked the drink with.

The halfgod then stood and stretched his nude body with a low grunt.  Suddenly, the world around him began to spin!  And before he could move his tongue to ask what was happening, he dropped to his knees fast asleep!

"How ever did you manage to bring such a fine bull all the way here?" Slave King asked his faithful disciple.  The tyrant's heavy cock stirred within the tight confines of his snakeskin thong.

"Uncle's wheelbarrow was nearby, so I was able to carry him here before he awoke," Aetos recalled through a gleeful expression.  "He came to just as I got the manacles ready -- the big fool even helped me by standing up while I snapped him in!"

"You have done well, young one," Slave King grunted, giving the blond buck a rough pat on the back.  He strode down the stone steps and approached the legendary son of Zeus...