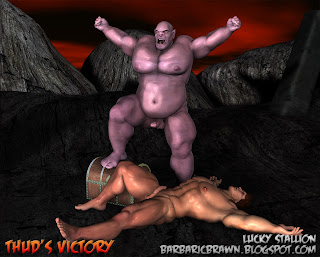 Kal, a human who hailed from the kingdom of Brunnr, heard talk from a trio of men of a fabulous treasure located only three days' journey from his home and to the rocky hills of the west.   The treasure was said to be an unmovable box whose contents were replenished with jewels and gold on the night of the red moon.  He heard one of the men laugh as he told of his friend who had made the trip on the last red moon and hadn't bothered returning.

"That lucky son of an orc is probably living the good life now!" he cheered, crashing his stein of alcohol with the other two.

Kal knew that the red moon was to rise in two nights' time.  He'd have to hurry!

The young buck made the trek over the charred, treacherous hills and eventually found the area described by the men!  There, mere steps away, lay a beautiful chest which surely contained the treasure he'd been seeking!  But before he could open it and take his reward, he heard the booming thumps of footsteps approach!

The brute's skin was rugged and purple, and his big belly shook with his every stomp forward.  It was an ogre -- the guardian of the chest!

"WHY HUMAN HERE?!" he roared at the softskin through jagged teeth.  "COME STEAL THUD SHINIES?!"

Thud wasn't as tall as a typical orc, but to Kal he seemed just as powerful.  Something about the ogre paralyzed his legs with fright.  Kal tried to run from the brute, but he couldn't muster the courage!  In seconds, he was face-to-face with the hulking ogre.

The ogre raised his clenched fists high overhead and brought them down upon Kal, downing the human with one blow!  Thud stood proudly over Kal's defeated body.  He placed his foot atop the chest, raised his beefy arms to the sky, and roared his victory! 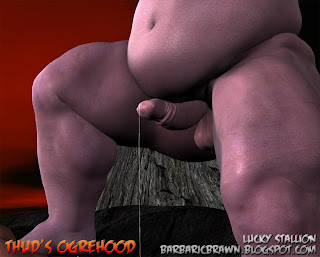 The ogre's cock was fat, Kal observed through half-open eyes.  It was stubby and curved in ways he'd never seen in his fellow men.  The head was flat and wide at the tip, and the hole that generously flowed Thud's precum was round and open.

The human's own manhood twitched at the sight of the aroused ogre.  He could already smell the sweet scent of Thud's lubricant, and he knew that he was about to be skewered by this brute's excited meat.

The powerful ogre flipped Kal upside down and seized control over his scrawny ankles.  Thud spread Kal's legs far apart and squatted, allowing his ogrehood to dribble its slick precum directly upon the softskin's puckering hole. 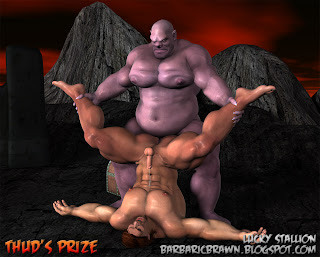 Thud's slick penis penetrated Kal's inviting butt, easily pushing past the ring and sinking into the hot, soft flesh inside his latest bitch.

Kal shouted with the sudden feeling of fullness and moaned out loud as the ogre's cock rubbed persistently against his prostate.  He shuddered and groaned through the dull pains caused by Thud's rough and clumsy fucking.  Thud stabbed at Kal's hole hard and fast, caring only about his own desires and not the human's.

Ogre mated human repeatedly throughout that night.  Countless ropes of Thud's goopy ogre semen was pumped deep into Kal's muscular gut, marking him as his bitch.

"Then you become Thud's!  You stay with Thud and let Thud fuck when me want!"

Kal quickly nodded his agreement.  So excited to have a new bitch to breed whenever he pleased, Thud's ogrehood sprang back to life!  With one quick thrust, Kal's hole was filled once again with the big-bellied ogre's fat cock.

Happy that he wasn't to wind up as food in that belly, Kal decided to lay back and enjoy himself as his new master had his way with him.

And the fabulous treasure?  Kal later found out that there was nothing in the box.  It was a trick to lure foolish humans to an ogre who would teach them a very valuable lesson.

The End
Posted by Lucky Stallion at 10:25 PM