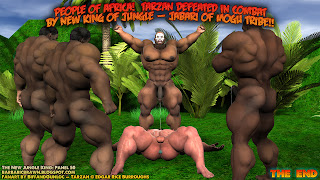 With Jabari's permission, Zuberi shoved the sacred jewel (with relative ease) into Tarzan's well-fucked hole!  The fallen jungle lord gave a groan of protest, but knew that he couldn't move or say anything against his master's wishes.  The black stud pushed Tarzan to the ground, where he lay spread-eagle and at the mercy of these men.

Jabari stood over Tarzan's head and allowed his satisfied manhood to drip its post-ejaculate into the white man's open mouth.  Tarzan obediently drank the sweet fluid as though it were nourishing water and rested his tired body.

Jabari grunted and beat his large pecs with his fists.  He bounced them a few times and raised his arms high.

He then bellowed, "PEOPLE OF AFRICA!  TARZAN DEFEATED IN COMBAT BY NEW KING OF JUNGLE -- JABARI OF MOGU TRIBE!!"

Kondo, Njau, and Zuberi shouted their approval for the jungle's new ruler!  Jabari would take Tarzan around to the various tribes to prove to the others that he had emerged victorious in battle with the white man.  He would make Tarzan suck his cock and lick from his hole to prove his submission.  Happy that one of their own now ruled once more, the tribesmen would then kneel and obey his direction for the growth of Africa.

Fate had allowed Tarzan the chance to be the master and lord these people and this land, but his arrogance and pride eventually became his downfall.  Tarzan was bound by the law of the jungle and was the slave of the African over him.  He was now where he rightfully belonged: at the feet of the new king of the jungle.

Jabari nodded to his brothers, giving them the OK to do as they pleased with the white savage.  Eager to undo years of frustration deep into his holes, they advanced upon his helpless body...

The End
Posted by Lucky Stallion at 10:57 PM