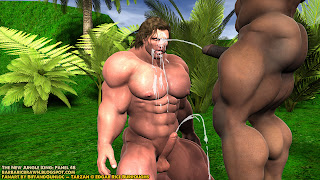 Once Jabari had had his fill of degrading his defeated opponent, he pulled his throbbing manhood from the muscular butt of Tarzan and commanded the white savage to kneel before him.

Not wishing to face the wrath of his master, Tarzan obeyed.  The ape man, exhausted and humbled, allowed his mighty arms to dangle and kept his eyes closed as signs of respect.

Kondo, Njau, and Zuberi watched with satisfaction as the white man paid for his theft.  They were eager to continue his punishment well after this -- Tarzan had many years of arrogance to atone for.  They and others throughout the jungle would be certain to help teach Tarzan the lessons he needed to learn.
Posted by Lucky Stallion at 10:36 PM