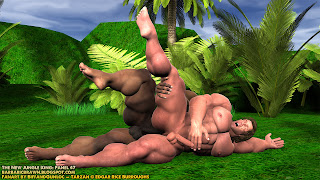 Over the next hour, Tarzan was fucked roughly in several positions by the man he now called master.  Jabari's thick, black cock worked its way deep into his body, pleasuring Tarzan in a way he never knew was possible.

Kondo, Njau, and Zuberi pounded their manhoods to the sight of Tarzan losing himself to the heat that now burned inside him.  They were quite familiar with the kind of moans the ape man produced.  They were the sounds of a man who would never be the same again.  After this fuck, each of them knew that the fallen jungle lord would be unable to resist having a cock inside him.

At long last, Tarzan's sexual dominance had finally been broken!
Posted by Lucky Stallion at 3:04 AM