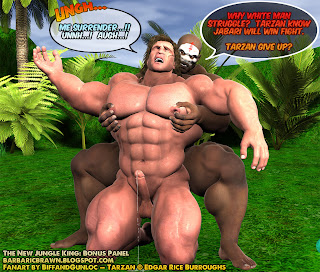 Whew...  Yet another series done!  This time 50 panels in total -- a pretty nice, even number that I promise I didn't plan ahead of time!

Ever since I began Barbaric Brawn, I had wanted to do a Tarzan series, but... well... take a look at my early stuff and you could see that I wouldn't have been able to do the ape man justice.  Flash forward several months, and I think that I've gotten okay enough to have given him a shot.

I was surprised by how nice this one became.  It isn't nearly as perfect as I'd like it to be, but I'm happy with how the setting and (more often than not) the lighting came out.  I can probably place a majority of the credit to the updated rendering engine I'm now using.

When I was first drafting the storyline, I didn't originally plan to have Kondo, Njau, and Zuberi come back.  But since the software allowed it, I brought them in and let them help Jabari stick it to Tarzan.  I don't usually do double-teaming (or in this case quadruple-teaming), so that was a fun challenge.

I hope you guys enjoyed this one!  I'll be around, posting new single images here and there while I think up a new story.  If you're hungry for more Tarzan action in the meanwhile, be sure to check out Wildjuba's awesome work over at BAM Men.  There's also the superb art of Herodotus which is hosted by the equally great Telemachus.

I'll see you guys later!  Feel free to leave me a comment here and let me know what you thought!
-BiffandGunloc
Posted by Lucky Stallion at 12:12 AM