What I've Been Up To 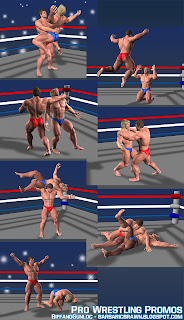 Hey guys.  I hope your week has been awesome.  I've been using my spare time to work on some pro wrestling poses -- most of these should look familiar to you, I've been using them for a while now.  I've been hoping to put them on the market to help supplement some income and get new 3D things for you guys to enjoy.

I thought I'd share some of the promo pictures I've made with them.  They're pretty simple, but they're meant to highlight the poses and nothing else.  I'm hoping they'll be approved and begin selling soon.

I've also been waiting for the new version of the studio I use to come out.  It contains fixes and enhancements that will help me a lot when I make these series.  I have no idea when that will be, though...  Hopefully it won't be too long.  If it doesn't seem like it'll come within the next two weeks, I'll go ahead and begin work on my next project.

Take it easy, all,
-BiffandGunloc
Posted by Lucky Stallion at 8:19 PM