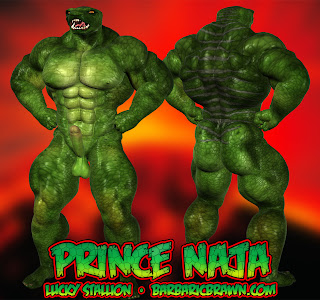 Naja is the crown prince of the strong and ruthless King Viper, ruler of the Serpent Scale Kingdom.

Prince Naja is a serpent man, whose species came into being thousands of years ago when the snake gods began to breed a race of cold-blooded, humanoid creatures that were to one day overthrow the warm-bloods and take control of the world.

It was written in the snake gods' Book of Scales that the first born son of the 50th king would be named Naja.  This prince would be blessed by the snake gods and given the strength that bring the serpent men the glory and treasure that they deserved.

The Book of Scales also prophesized that a barbarian of high rank among the human men will also rise to do battle with the blessed prince.

This, too, was written (though much more cryptically) in the Book of Men, a collection of prophesies that was held dearly by the wisest of the human men.  This barbarian was believed to be their savior against a mighty evil which would one day threaten the human race.  His failure would mean a catastrophic change in the dominance man has maintained since the dawn of time.

For years, both males have built their bodies and trained rigorously.  And on the day they were fated to meet, both would wrestle for the ultimate and total supremacy of their race!
Posted by Lucky Stallion at 12:02 AM