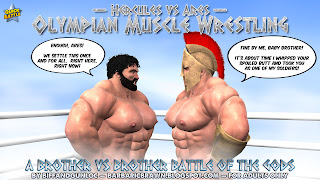 Built in the sky, far out of the reach of mortal men, is the pro wrestling ring created by Hermes, the inventor of wrestling.  The idea came to him one day when he was speaking with Chronos, the god of time, about the sport.  Chronos told Hermes that far in the future, men would someday wrestle within a 'squared circle' with four protruding corners and 12 rigid coils keeping them inside.  These men, he said, would try to make the other submit or hold them down for a count of three.  He also told Hermes of a bell that would ding before and after each match.

Fascinated by the idea, the messenger god set out to work.  He built a replica of the ring Chronos described, but made entirely of stone with sheepskin stretched over the canvas.  To better protect his wrestlers, he padded the mat with a thick layer of golden wool.  His last touch was to implement an automatic drum to count a pinfall and a magical bell which would detect when a match began and ended and sounded on its own.

Hermes stood back and admired his handy work.  He chuckled and tried to imagine the many ways in which future men would do battle in such a strange contraption.  He named this game: Olympian Muscle Wrestling.

Over the months since its completion, the wrestling ring had seen many uses by the gods.  Many of them chose to personally settle their differences within the device, while others chose to pluck humans (and sometimes monsters) from the world below and make them fight instead.

Now, Hercules and Ares, half-brother sons of Zeus, will step into Hermes' pro wrestling ring and finally put to rest all of the animosity and strife each have caused the other over the decades.