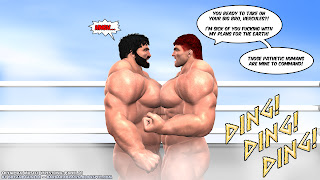 Both powerful studs stood naked in the middle of the wrestling ring, chests and abdominals pressed tightly together.  Their hard, jutting nipples rubbed and mashed together with their every heaving breath.

Hercules and Ares growled at each other for a while, each sizing up his brother carefully.  It'd been a long time since they'd stood so closely.  Neither knew how much the other's skills had grown since then.

This time, however, all would be settled.  One man would become dominant over the other.  This wrestling match would finally put an end to their quarrels for good.

"You ready to take on your big bro, Hercules?!" the god of war snidely asked, pushing his big chest against Hercules'.  "I'm sick of you fucking with my plans for the Earth!"

Hercules growled angrily as Ares continued to press against him.

"Those pathetic humans are mine to command!"

DING DING DING the magic bell suddenly rang, signalling the start of the match!
Posted by Lucky Stallion at 8:30 PM