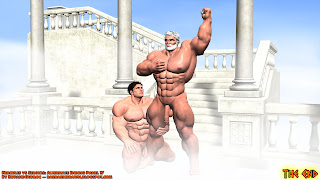 Sergios knelt before his master and placed his hand around Zeus' tree trunk leg.  He sat quietly as Zeus struck a series of poses and savored the last moments of this victory.

Two days later, the thunder god would send word via Hercules to the human's uncle, letting him know of his nephew's fate and of his safety under the authority of Mount Olympus and its leader.

The middle-aged vintner could hardly believe it, but as it came from Hercules' own mouth, he felt compelled to.  A hero to those in need, Hercules helped the man to finish harvesting what Sergios had to leave undone.  With his strength and speed, the work was done in half the time.  Grateful for the help, Sergios' uncle allowed the godling to stay in his nephew's old room whenever he wished and even took care of Hercules' sexual desires on a nightly basis.

Sergios lived with Zeus in heavenly bliss and was almost never denied his wants or needs.  Because of the ambrosia and the god's love he never grew a day older or fell ill to the diseases of the world.

And although Zeus would take on many new consorts and loves throughout the ages to come, the father of gods and men always held a special place in his heart and in his bed for the man named Sergios.

The End
Posted by Lucky Stallion at 8:27 PM