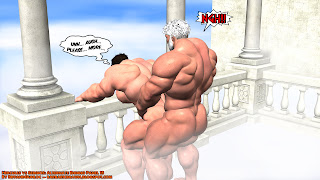 Thunder crackled and boomed all around the area as Zeus bred his new muscle slave, letting the other Olympian gods know of his latest conquest.  They would come around eventually to see this man for themselves (all but Ares, who would be busy for a while), but for now, the two would be left alone.

Sergios' hole pleased its master well.  The muscles within the human massaged and squeezed around the god king's heavy sword of flesh as it exited and reentered him quickly and without mercy.

Zeus' manly grunts overpowered Sergios' moans and pleas for more.  The human felt faint at the unbelievable sensations taking place within his body.  He wanted to climax and release his seed more than he'd ever wanted to in his life, but he was unable.

Sergios quickly realized that when in Zeus' domain, none would rest or orgasm without the master's permission.
Posted by Lucky Stallion at 10:02 PM