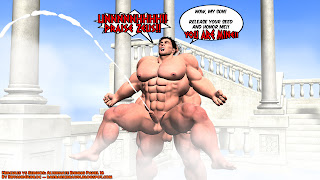 Hours passed as Zeus bred the simple laborer from the world below.  By the time Zeus was ready, Sergios shook with need to empty his heavy balls.

Zeus' power over the human prevented him from climaxing.  This was his punishment to Sergios for consuming ambrosia.  Now that his crime had been repaid, it was time to allow his consort to do what all men must.

Holding his slave off the ground with little effort, Zeus thrust his burning-hot cock deep inside Sergios' hole one last time and shouted, "Now, my son!  Release your seed and honor me!!"

The god's cock bounced and throbbed as it shot burst after burst of semen into the human's quivering butt.  "YOU ARE MINE!!"

"PRAISE ZEUS!!" he cried again and again as his cock shot 12 healthy ropes of male seed onto the clouds below them both.

Zeus was pleased with this man's hole.  He was also very pleased with Hercules.  His chest swelled with pride at his victory over Sergios and his renewed dominance over the mortal beings of the world.

All was as it should be, and men would forever fear and love the mighty Zeus.
Posted by Lucky Stallion at 12:24 AM