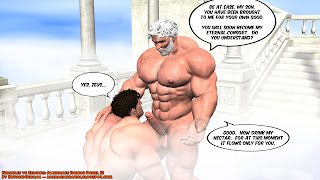 Moments later, Sergios awoke to a heavenly sight.  He was somewhere in the sky, and mighty Zeus was standing before him.  The clouds below him were soft and somewhat cool to his skin, but not unpleasant.

Still a little wobbly, Sergios could only manage to kneel before the god king.  Zeus placed his beefy hand upon Sergios' shoulder and smiled.

"Be at ease, my son," he spoke warmly.  "You have been brought to me for your own good.  You will soon become my eternal consort.  Do you understand?"

"Good.  Now drink my nectar," Zeus said with satisfaction.  His cock rose to full erection and began to secrete a healthy stream of precum.  "For at this moment it flows only for you."

Sergios took one look at the erect cock of the father of all men and became instantly infatuated with it.  He placed his lips around the head and began to drink.
Posted by Lucky Stallion at 11:02 PM