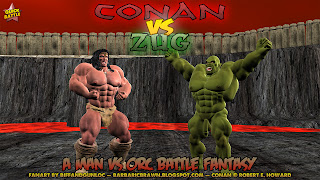 With characters requested by reader Sharlin, Conan vs Zug features Conan the barbarian battling the short (by orc standards) greenskin named Little Zug who was previously seen in my second series 'The Last Battle'.

This series is labeled a Quick Battle because it cuts out a lot of the length of story that my other series usually contain, thus reducing the number of panels needed, increasing the posting speed, and getting right to the action.

Here, Conan meets with Zug on the hot and arid Ashen Pass, newly-renovated with an ominous sky and wood railings.  The orc impedes Conan's attempt to cross into the neighboring lands to continue on his journey, so the barbarian must fight!

But Zug isn't like most of the creatures Conan has previously fought and defeated.  The orcs are incredible wrestlers and ferocious fighters, but unknown to the barbarian, orcs are also able to sexually subdue humans with little difficulty.

Conan vs Zug is a man vs orc battle fantasy for adults only.
Posted by Lucky Stallion at 3:41 AM