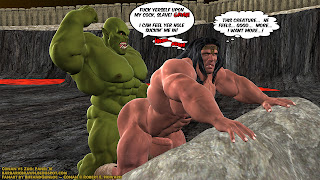 Conan shuddered in heat as Zug began a steady plowing of his soft, willing hole.  The orc's cock pumped a hearty supply of precum laced with his sap of arousal to keep the human pliant and hungry for more.

Zug's chest swelled with pride -- he'd broken yet another man with his superior physical and sexual strength.  No matter how many times he accomplished the feat, it never felt tedious.  With each man that he conquered, his sense of greatness grew even higher.

Without pulling out, Zug turned Conan around and made him stand on his own.

"Fuck yerself upon my cock, slave!" Zug commanded with a growl, standing still and forcing Conan to do the rest of the work himself.  "I can feel yer hole suckin' me in!" he taunted.

Conan closed his eyes and grunted lowly.  He held onto the boulder and lewdly pushed back to meet his master's groin.  Zug flexed his muscular arms and gazed at his own incredible body as he enjoyed the tightness of the human. 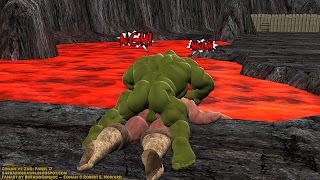 Conan lay at the edge of a scorching-hot lava pool.  Although Conan by then was already well-adjusted to the girth and length of the one he called master, Zug's cock continued to breed his hole mercilessly.

Just as the barbarian felt as though he might go mad with lust, he felt a sudden change in the orc's cock!  It began to quiver and swell! 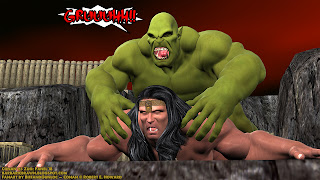 Zug skewered the barbarian's butt five more times before stabbing it to the hilt and orgasming!  The green brute uttered a deep, terrifying war cry as he flooded his slave's hole with his life-giving seed!  Rope after hot, creamy rope of orc semen flooded Conan's insides.

The Cimmerian lay still and moaned submissively as the superior male marked him as his own.  He could feel Zug's cock bounce with every round it sent gushing into him. 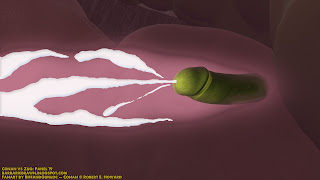 The barbarian moaned and whimpered pathetically with the merciful orgasm he was allowed to have.  His human cream splattered onto his belly and the land below, coating them both.  His inability to plant that seed into the hole of his enemy was yet another sign of his failure as a warrior and as a man.

Sated at last, Zug pulled himself from the hot, sloppy confines of his slave and wiped the head of his cock clean along Conan's sweaty backside.  He stood with a grunt and pounded his chest as he roared his triumph to the sky.
Posted by Lucky Stallion at 6:49 PM