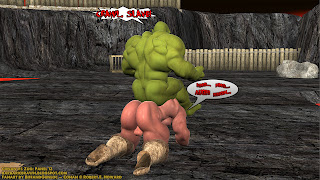 After pulling Conan by his hair up and forcing him onto his hands and knees, Zug took his seat upon the human's battered back.

Conan struggled to carry the heavy weight of his master as his arms and legs slowly brought them to their destination.  He grunted with every exertion and struggled to keep his limbs from collapsing. 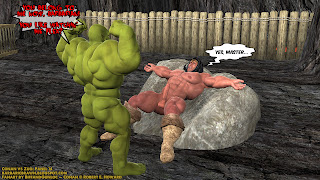 Finally, they'd made it to the boulder near the entrance where Conan had crossed into the Ashen Pass.  Zug lifted him into his arms and tossed him onto it.  Conan, allowed a moment's rest, gratefully lay his arms across its smooth surface and dug his heels into the dry ground to support his position.

As he rested, Conan stared at the orc as he gave a display of dominance.  He watched as Zug bounced his pecs and pat his hard biceps.

"You belong to me now, barbarian!" Zug growled masculinely.  He chuckled at the human's throbbing erection.  "You like watchin' me flex?"

"Yes, Master..." Conan honestly mumbled.  He couldn't deny that the power of this brute did turn him on.  For the first time in many years, Conan felt an excitement and stir between his thighs that he couldn't comprehend.  Could it be that he enjoyed such domination?  Perhaps surrender to this green beast wasn't so bad after all... 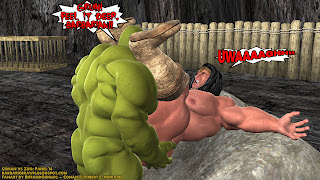 Rest time was over.

Zug grabbed hold of the human's legs and hoisted his boot-clad ankles over his shoulders.  Conan didn't protest as his new master pressed his cock's fat, leaking head against his quivering hole.  He drew a sharp breath just as Zug slid inside!

The orc grunted loudly, savoring the heat of his slave.  "FEEL IT DEEP, BARBARIAN!"

Conan screamed in pain as his master's meat defeated his last defenses!  Zug mercilessly pushed himself all the way inside, until his fallen opponent's soft, pink balls rested against his leathery groin.

Conan moaned and his head lolled back.  His body struggled to adjust to the new sensations of another male penetrating him.  Was this how it felt when he fucked his enemies?  Their shouts and moans suddenly came rushing back to him.  He remembered the looks on their faces as he fucked them.  And now it was he who lay under the muscular body of another, accepting his cock without the ability or the strength to fight back.  It was he whose hole was now at the mercy of a stronger being.

Very soon, however, Conan began to feel a strange heat build inside his butt.  The orc's sap of arousal made its way into his bloodstream, numbing the pains of his penetration and flooding the barbarian with feelings of lust and desire for the orc.

Conan's hole finally relaxed around its green invader.  Zug knew that it was time to breed this barbarian into ultimate servitude.
Posted by Lucky Stallion at 10:15 PM