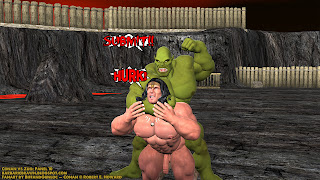 The orc moved to lift Conan onto his knees and hooked his forearm around the human's neck.  Conan grunted and fought to draw breath!  The orc's arm felt like a mighty snake, constricting his neck and squeezing the life from his struggling body!

"SUBMIT!!" Zug snarled.  He brought his clenched fist down and struck Conan in the head again and again.  The barbarian grunted and groaned with every punch.  His efforts to claim victory over this beast seemed all but futile at this point.  He writhed in the unbreakable grasp of the orc.

Zug halted his attack and ran his hand slowly over Conan's incredible body.  He fondled the muscleman's beefy pecs and hard abs.  His green fingers trailed down until he found the human's limp cock.  Taking it in his grasp, he roughly manipulated it until it hardened to full length.

Zug chuckled cruelly into the human's ear and slid his stubby tongue along its pale-skinned folds.

The laws of the world were cruel and barbaric.  Conan knew that if he were to fall to the orc in battle, his proud, unclaimed backside would be at the mercy of the green brute.

The foreign emotion of fear had finally struck the barbarian. 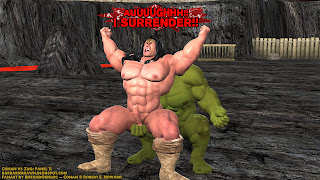 Sensing that this opponent was ready to be finished off, Zug reached under and grabbed hold of the human's heavy balls!

Conan arched his back and spread his great arms wide, bracing himself to withstand the sudden assault!  A great bellow of pain erupted from his throat!  The barbarian attempted to escape the hold, only to feel his enemy's hand punish him by squeezing even harder!

Zug doubled the pressure, torturing the source of Conan's seed without mercy!  He pulled them lower and dug his stubby, green nails into the stretched skin.  Zug enjoyed conquering humans by their orbs.  Unlike most parts on a man, an orc's dangling pride was superior.  Theirs were bred to be tough and were more easily able to withstand such a tactic.

But Conan's DNA held no such advantage!  Nor did his years of fighting toughen them up for such an attack!  The pain was unlike anything he'd ever experienced before.  It rapidly grew far more than the traveling warrior could bear!

"I SURRENDER!!" he screamed over and over again!

Zug gave the pale-skinned human one final squeeze with his mighty fist and let go.  Conan's knees buckled and he immediately fell to the ground.

At long last, Conan the barbarian was vanquished. 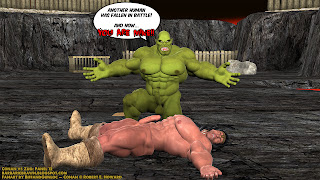 Conan held his hands against his sore balls.  What seemed like an hour of agony passed in mere minutes as the pain soon subsided.  Conan relaxed on the ground and attempted to rest.

Zug rolled his newest slave onto his back and knelt to better examine Conan's battered body.

The barbarian's cock had grown somewhat limp, but he quickly took care of it.  His skillful fingers easily brought Conan's cock back to full length.

Zug patted the slave's firm chest and stomach.  He ran his hands over Conan's thick legs and beefy hips.  Yes, he thought, this one would do well in the mines and the lumberyard.

"Another human has fallen in battle!" the orc spoke, bouncing his proud pecs.  "And now... YOU ARE MINE!!"

It was time to force his orchood inside the barbarian's butt and break him sexually!  Zug knew that Conan would soon become his for life!
Posted by Lucky Stallion at 10:25 PM