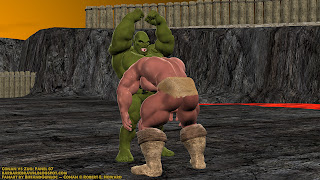 Stumbling forward, Conan's aching head found a temporary place of rest against Zug's pecs and abs.  The orc's hot skin was leathery, yet soft enough for a man to find comfort.  His scent was exotic, but not unpleasant.  It intoxicated the barbarian's senses.

Conan felt weary and struggled to make sense of what was happening to him.

Eager to prove his total superiority over the human, Zug growled and balled his fists.  He raised them high overhead and... 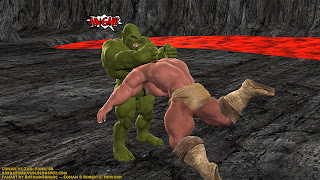 ...slammed them down, striking hard against Conan's back!  The barbarian grunted in pain.  He lost his footing and tumbled to the volcanic ground once more!

Zug grinned cruelly as he stepped around the body of the moaning human.  He cracked his knuckles and licked his lips.  Such a proud and hardened man was putting up much less of a struggle than he expected.  Perhaps the barbarian was harboring deep desires to finally be subjugated by another?  The orc's cock rose at the thought. 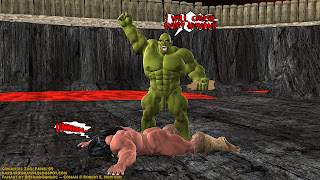 Conan lay still on the hot ground and groaned with the dull aches in his body.  Outfought by the faster orc, he could only try and minimize the heavy damage that Zug was dealing him.

The barbarian felt the warm air around them caress his bare butt as the orc tore the loincloth from his hips.  Few men had ever managed to do such a humiliating thing to Conan.  Most of the time it was he who stripped his opponents of their clothing.  But now it was he who lay nude before this green brute!

Zug held the human's scant clothing in his beefy hand and squeezed it tightly.  He raised his arm high and shouted, "I WILL CRUSH EVERY HUMAN!!"
Posted by Lucky Stallion at 9:13 PM