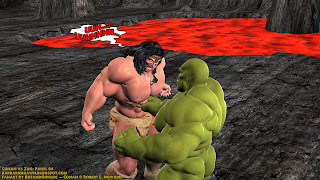 While a distracted Conan was tending to his aching scalp, his opponent sent another fist into his muscle gut!  The green fist sent ripples and waves of shock throughout Conan's front!

He could hardly remember the last time he felt such power.  The impact felt as though a bolder had slammed into his stomach and rattled his insides.  A low moan of pain escaped Conan's throat. 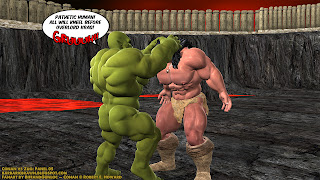 But before the ebony-haired warrior could sink to his knees again, Zug grabbed hold of his head and growled, "Pathetic human!  All will kneel before Overlord Krag!"

Conan didn't have long to wonder who -- or even what -- Overlord Krag was.

"GRUUUH!!" the orc roared deeply, bestially, as he drove Conan's head down to meet his knee! 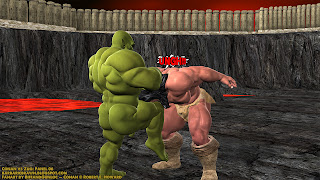 Conan's rugged, sullen face slammed against the orc's tough, green knee!  Conan reeled in pain and uttered a grunt.  Luckily, his nose hadn't broken.  His face stung, however, and felt somewhat numb from the impact.

The battle wasn't going at all as he'd expected it to.  How could such a creature -- especially one smaller than he -- dominate him with such ferocity?  How could he be losing to the orc?

Conan groaned and wobbled on his unsteady legs.  He found himself leaning against Zug for support.  The orc chuckled and held his foe's muscular body steady.
Posted by Lucky Stallion at 6:27 PM