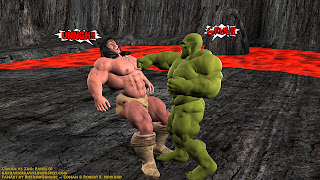 Conan and Zug stood with pride on the volcanic field of battle.  The two studs growled at one another, each hoping to instill fear in his opponent.  But neither combatant knew fear.  The heat of battle quickly took hold and the fight was on!

Zug wasted no time in landing the first blow!  He leapt forward and sent his clenched fist into the mighty barbarian's beefy pecs!

"UNNGH!!" Conan bellowed, taking the full brunt of the hit.  The impact was so great, it toppled him to the ground!

Zug grinned cruelly and bounced his pecs.  He'd defeated many humans in his life -- but this one was special, he realized.  This one was used to winning.  He would have fun teaching this barbarian a lesson in submission. 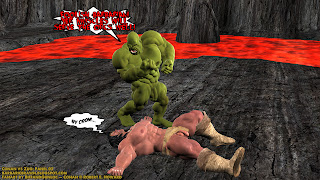 Conan lay upon the hot, dry ground as Zug stood over him, flexing his bulging muscles.  The adventurer never imagined that this creature wielded such power!

Serve?!  Conan was startled by the creature's words.  No man would ever be Conan's master, let alone a monstrous beast!  Conan was destined to rule!  Men would serve under him!

"By Crom..." he groaned and struggled to rise.  He would beat the orc into submission, fuck his holes, and show him the unbreakable strength of a Cimmerian! 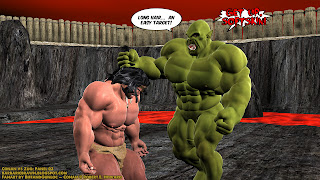 With an impatient snort, the greenskin leaned over and grabbed a fistful of Conan's long, ebony locks.  He pulled without mercy, forcing the barbarian to rise!

These pathetic creatures had many weaknesses to exploit.  Their bodies were strong and hardy -- good for manual labor and wrestling practice -- but man was no match for orc.  They didn't deserve to be in a position of influence.  Only the strongest would take their rightful place and rule over the world!

Conan bellowed in pain, but chose to obediently stand than to suffer from the hold on his hair.  He placed his hands on his head and gingerly rubbed the sore scalp underneath his proud, dark mane.

Conan was beginning to realize that this orc creature was ruthless!  Perhaps even more so than himself!
Posted by Lucky Stallion at 4:55 PM