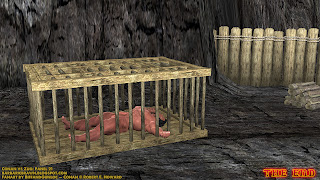 Utterly drained of strength and coated with his master's fluids, Conan lay limp in Zug's arms as he carried his tired body over to the cage that stood near the battlefield's entrance.  The orc dumped him inside and sealed the lid shut.

As Zug journeyed back to Grohmah, the capital city of the orcs, Conan fell into a deep sleep.  His dreams were filled with the images of all those he'd defeated in his days as an adventurer.  Only this time, they got their revenge.  In the dream world, he relived each of those battles in an alternate reality where his enemies had triumphed.

A few hours later, a small army of orcs led by Zug came back to the Ashen Pass to haul Conan (along with a few other humans who they encountered and vanquished on the way) back to Grohmah to begin his life of servitude.  It was there that he would meet Lortho, Vulg, and the former human king Ranzen.  Those three men helped Conan to adjust to a life under orc rule.  But having seniority and the mightiest muscle among the other human slaves, they also took advantage of Conan and plowed his holes for many, many months to come.

And so, the glorious adventures of Conan the barbarian ended.  The Cimmerian's story would continue to be told, yes, but only among the orcs who would tell future generations of the barbarian's fall and of the many ways in which he served his greenskinned masters.

The End
Posted by Lucky Stallion at 7:28 PM