This panel contains depictions of watersports (the out-of-the-cock, golden variety), so if that kind of thing bothers you, skip this post. 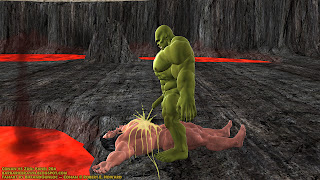 Zug stripped Conan of his boots, necklace, and headband and tossed them into the lava.  The fallen warrior's clothing burned to a crisp and vanished from the world, along with it his freedom and pride as a man.

The orc's rugged foot kicked him in his side, forcing Conan onto his back.  Zug grinned and assumed a relaxed stance over his slave. 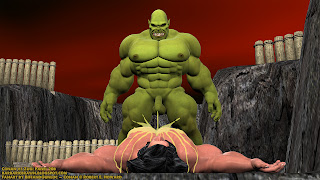 The barbarian felt a twinge of disgust at being marked by the green brute, but as Zug's slave, he was obligated to accept anything his master wished.  Conan lay still and obediently allowed the victorious orc to coat him in his urine.

Zug uttered a long, low moan of satisfaction.  He stared his slave in the eye and dared him to object.  What looked back at him was a man who's submission was complete and final.  Conan was his.
Posted by Lucky Stallion at 7:20 PM