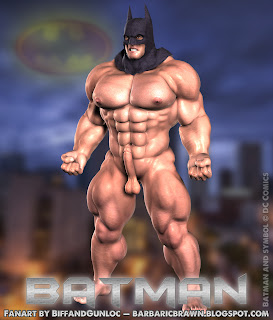 I wanted to create a Batman model recently, so I tried my hand at him.  This isn't meant to be a hint at any future projects -- it's just something for fun.  This blog is primarily meant for the gruff adventures of ancient barbarians, but I do still love modern muscle and will work it in when the desire hits.

Batman and symbol are © DC Comics


The Dark Knight of Gotham City stands vigilant on the lookout for anything that would threaten the safety of its people.

Over the years, billionaire crimefighter, Bruce Wayne, has sculpted a body of masculine perfection.  Many of Gotham's citizens have lusted after his incredible chest, big nipples, and rock-hard abs, but such things were frequently confined by the requirement of business suits or tuxedos.  It was only as Batman that he felt he could really show off his work of pride.

Combined with his high intellect, his massive muscles have helped to bring countless dregs of society to justice.  Many of those criminals dream of the day when the caped crusader is brought to his knees and made to surrender.  They stroke their cocks at the thought of the mighty Batman, on his hands and knees, crying out for mercy from the one to finally tame him.

During his most restless nights in bed, Bruce lies awake, fearful for that day.  He knows that it's only a matter of time before he makes the one wrong move that ends his secret life as a hero.
Posted by Lucky Stallion at 8:30 PM