The Last Battle: Profile of Vulg 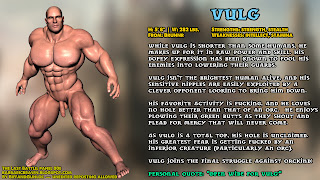 While Vulg is shorter than some humans, he makes up for it in raw power and skill.  His dopey expression has been known to fool his enemies into lowering their guards.

Vulg isn't the brightest human alive, and his sensitive nipples are easily exploited by a clever opponent looking to bring him down.

His favorite activity is fucking, and he loves no hole better than that of an orc.  He enjoys plowing their green butts as they shout and plead for mercy that will never come.

As Vulg is a total top, his hole is unclaimed.  His greatest fear is getting fucked by an inferior creature (particularly an orc).