The Last Battle: Profile of Rogg 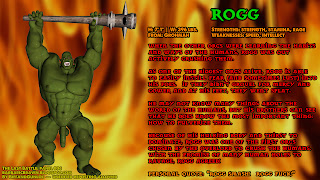 When the other orcs were learning the habits and ways of the humans, Rogg was out actively crushing them.

As one of the biggest orcs alive, Rogg is able to easily instill fear (and sometimes lust) into his foes.  If they didn’t grovel for mercy and cower and at his feet, they went splat.

He may not know many things about the world of the humans, but his brothers can see that he does know the most important thing: how to pulverize them.

Because of his hulking body and thirst to dominate, Rogg was one of the first orcs chosen by the overlord to crush the humans.  With the promise of many human holes to ravage, Rogg agreed!