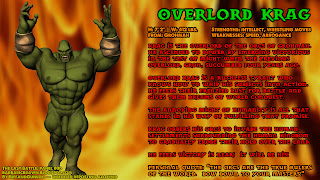 Krag is the overlord of the orcs of Grohmah.  He ascended to power by emerging victorious in the Test of Might when the previous overlord, Gron, succumbed four years ago.

Overlord Krag is a ruthless tyrant who knows how to whip his subjects into action.  He feeds their frenzied lust for battle and gives them dreams of world conquest.

The annoying might of humanity is all that stands in his way of fulfilling that promise.

Krag orders his orcs to invade the human settlements surrounding the human kingdom to gradually erode their hold over the land.

He feels victory is near!  It will be his!

Personal quote: "The orcs are the true rulers of the world.  Bow down to your masters!"
Posted by Lucky Stallion at 5:14 PM