The Last Battle: Profile of Lortho 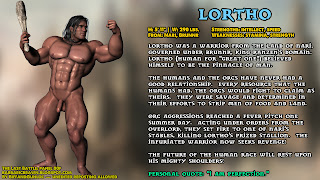 Lortho was a warrior from the land of Nari, governed under Brunnr, King Ranzen's domain.  Lortho (human for "great one") believed himself to be the pinnacle of man.

The humans and the orcs have never had a good relationship.  Every resource that the humans had, the orcs would fight to claim as theirs.  They were savage and determined in their efforts to strip men of food and land.

Orc aggressions reached a fever pitch one summer day.  Acting under orders from the overlord, They set fire to one of Nari's stables, killing Lortho's prized stallion.  The infuriated warrior now seeks revenge!

The future of the human race will rest upon his mighty shoulders!

Personal quote: "I am perfection."
Posted by Lucky Stallion at 2:41 PM