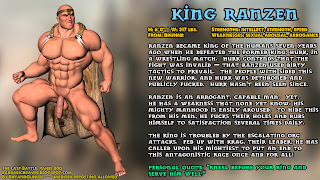 Ranzen became king of the humans seven years ago when he defeated the former king, Hurk, in a wrestling match.  Hurk contends that the fight was invalid - that Ranzen used dirty tactics to prevail.  The people with sided this new warrior, and Hurk was dethroned and publicly fucked.  Hurk hasn't been seen since.

Ranzen is an arrogant, capable man.  Yet, he has a weakness that none yet know: his mighty manhood is easily aroused.  To hide this from his men, he fucks their holes and rubs himself to satisfaction several times daily.

The king is troubled by the escalating orc attacks.  Fed up with Krag, their leader, he has called upon his mightiest to put an end to this antagonistic race once and for all!

Personal quote: "Kneel before your king and serve him well!"
Posted by Lucky Stallion at 3:53 PM