The Last Battle: Profile of Gorg 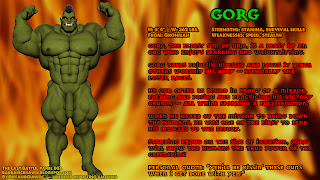 Gorg, the eldest son of Urm, is a beast of an orc who enjoys sparring and weightlifting.

Gorg takes pride in himself and loves it when others worship his body -- especially the lesser races.

He can often be found in front of a mirror, flexing and posing and practicing his victory grunts -- all while sporting a full erection.

When he heard of the mission to bring down the humans, he was one of the first to lend his muscles to the effort.

Standing proud of the site of invasion, Gorg will show the humans the true power of the greenskins!

Personal quote: "Yeh'll be kissin' these guns when I get done with yeh!"
Posted by Lucky Stallion at 8:14 PM