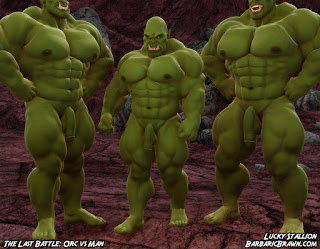 As orcs go, many were quite tall when standing close to their human counterparts.  Orcs generally stood one to three heads taller than a typical human and carried up to 20% more weight in pure muscle on their sturdy frames.  Ra'zug, however, was one whose stature was closer to that of man than his brother orcs.  But what the orc lacked in height, he more than made up for in ferocity and fearlessness.

Whenever the others taunted and teased him for his height, the littler stud instantly pounced, managing to wrestle most of them down and elicit an immediate retraction and apology.  Despite his reputation, the bigger and dumber orcs continued to harass Ra'zug, only to meet the same fate time and again.

When Bra'thor Krag, overlord and leader of the orcs, began his campaign against the humans, it was Ra'zug who jumped at the chance to prove himself.  Krag, grinning broadly at the eager underling, assigned Ra'zug to a farmstead not far from the orcs' latest land grab.  Krag's scouts reported that the farm was providing a steady supply of meat and vegetables to a human garrison a few miles north from there.  It would be a good task for the runty orc to show his true worth to his race. 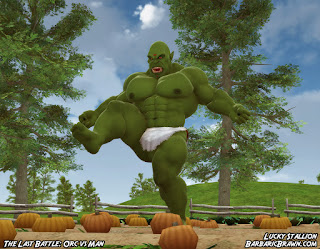 Ra'zug strode confidently onto the farm, flattening pumpkins and crushing heads of lettuce as he saw fit.  The orc looked around for humans, but could see none.  The overlord told him that this farm was inhabited by only two men, but he was still disappointed to see that neither were around to watch his rampage.

"HUMANS!!" Ra'zug roared, stomping everything in range.  With every smash, he took food out of one more human soldier's mouth and brought the lot of them that much closer to submission!  "COME 'N FACE YER DOOM!!"


Whistling a jovial tune, Joshua Redfield, only son of Bryant Redfield, was carrying a sack of feed back to the shed to store for next week's chicken arrival.  Today had been a pretty good day for the brown-haired 19-year-old youth.  He didn't have many chores to get done, so he was free to wander the land that King Alurad Ranzen had given his family and study the plants and insects that grew and lived in the area.  He also spent a bit of time enjoying himself as he thought about the powerful and handsome King of Men.  Joshua's face turned red as he thought about his king flexing his heavy muscles and felt a stir in his loins as his fantasy of King Ranzen turned erotic... 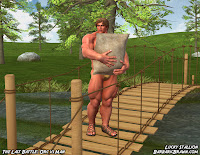 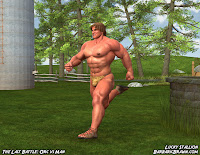 As he made his way closer to home, however, he was treated to sounds that stopped him in place and sights that turned his blood to ice.  The source of the noise was a muscular greenskin stomping on his daddy's crops!  The unusually-small orc laughed in a deep, mocking voice as he gleefully ruined gourd after gourd.

A surge of anger overtook the strapping farm boy.  He dropped the chicken feed and balled his fists tightly.  His growls intensified as he broke into a sprint to stop the orc from destroying their hard work!  Confident that he'd take the intruder by surprise and scare him off, Joshua never hesitated, dashing as fast as he could toward the orc! 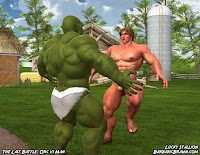 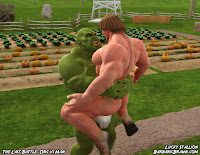 But Ra'zug was no fool; with the wind blowing his way, he could easily smell the human's arrival to the farm.  He flashed a sinister grin as the youth ran straight at him.  The orc turned and ran head-on toward his would-be attacker with wide-open arms!  Joshua yelped as those meaty, green arms wrapped around his slimmer torso, secured him in a hug, and lifted him from the ground!

"What have we 'ere?" Ra'zug grunted, his orcish face contorting into an expression of anger.  His powerful arms squeezed the human tightly, quickly subduing the foolish youth's struggles.

Joshua quivered with fear at the orc's overwhelming strength.  All thoughts of protecting his father's crops flew from his mind as he gazed into the greenskin's hard, red eyes.  The orc's skin was rough and firm against his own, and his muscles were hot and throbbed to the touch.

"Else what, human?" Ra'zug grumbled in his low, gravelly voice, adding pressure to his bearhug.  "Yeh gonna piss yerself in fright, softskin?" he asked, laughing out loud at the quivering farmer.  Though the stud had a fair amount of muscle on him, he was but a scrawny thing compared to even the wimpiest orc out there. 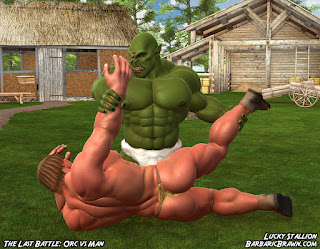 "C'mon, puny human, let's see how long yeh can hold out in wrasslin'!" the greenskin growled, letting Joshua go and instantly diving on him, grabbing the human's arm and leg and contorting them at an awkward angle.  The young buck hollered out for his daddy's help, but nobody would come around to his aid! 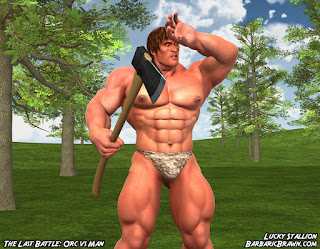 Bryant Redfield, farmer and proud father of Joshua, wiped the sweat from his brow and put down his trusty axe.  He'd finally finished chopping down the old, rotted tree that had been a magnet for pests and vermin lately in an effort to keep them from multiplying near his home on the farm.  The 42-year-old stud lit the last remnants of the dead tree on fire and watched it burn.  When nothing but ash remained, he decided to return home and see if Joshua had finished his chores on time today.

"I wonder if that son-a mine'd fancy takin' a bath with his old man," the farmer mused aloud.  He enjoyed the deep tissue massage that Joshua administered during their baths together — something the old man wouldn't trade for all the gold in King Ranzen's royal coffers. 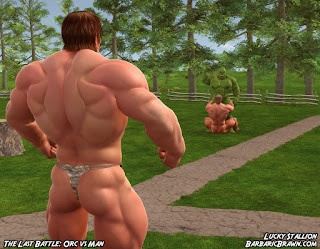 But as he approached the house, a great feeling of dread filled his gut.  Something was wrong.  He raced to the farm to find his son nude and on his knees — before an orc of all things!  Bryant's eyes grew wide as he saw Joshua's head bobbing up and down before the orc's naked groin — he was sucking the red-eyed brute! 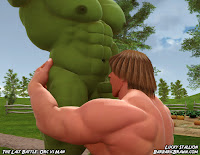 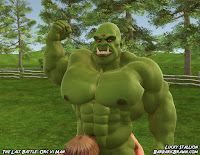 Ra'zug looked up to see the one the human called 'Daddy' standing there watching them, slack-jawed and in a fog of confusion.  A naughty smile came over the orc's face, and he bounced his pecs for the older man.  He licked his tusks and grunted, "Yer seed took ta suckin' orc cock better'n I expected.  Don't worry, softskin... got plenty fer yeh when he's done."

Joshua didn't mind either of the two; he merely sat there, sucking away at Ra'zug's fat cock and drinking his fill of the sap of arousal that drooled freely from its slit.  The syrupy substance seemed to flow faster the more he licked and teased the underside of that bulbous cockhead. 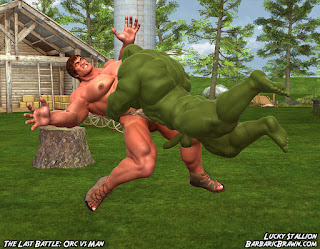 "Yew be lettin' my Josh'wa go this instant!!" Bryant snarled, running forward, fists clenched and ready to strike!  But the farmer wasn't a fighter, and his clumsy attempt at the first blow proved foolish.  The orc shoved the younger human away and tackled Bryant by his waist, bringing him crashing and groaning to the ground! 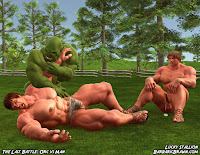 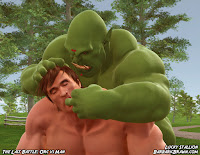 Joshua sat on the grass in a stupor, watching his new master wrestle his father into submission.  He watched as the orc spurt a healthy load of precum onto his middle finger and pushed that meaty digit into the human's roaring mouth.  Bryant's struggles ceased soon after that, his cock growing full and erect in his loinclothing.  The older human began moaning around Ra'zug's thick, salty finger, sucking it lovingly, his tongue scraping at the rugged skin to lap up every trace of the orc's natural lubrication he could find.

"Gruhh... ya like that, don't ya?" Ra'zug cooed deeply, gruffly, sliding his fingers slowly in and out of Bryant's suckling lips.  "Yer wantin' some more?" he chuckled, grinding his cock against the human's lower back. 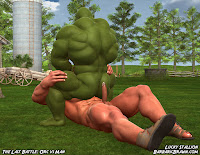 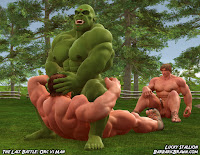 "Y-Yeah... please..." Bryant groaned with need, nuzzling the wet digit.  He'd never felt such a yearning for anything before, least of all anything to do with an orc!  He felt Ra'zug's rough hand rip his loinclothing from his hips and render him nude.  The orc pushed his newest conquest onto his back and straddled his upper body.  Holding the man's head in his big hands, he slowly fed him his throbbing orchood...

Like his son before him, Bryant Redfield took to sucking orc cock like it was the most natural thing in the world.  It was as Overlord Krag had said: the humans had a natural sexual weakness to orcs!  The excitement of verifying the discovery for himself sent the stout orc into a frenzy, thrusting his fat cock in and out of the older human's hungry mouth!

"On yer hands 'n knees, human!" Ra'zug barked at Joshua, who complied with the order instantly.  "'N get over here!"  The younger man scurried over to his master's front and, somehow knowing exactly what he wanted, turned away and raised his ass in front of the orc. 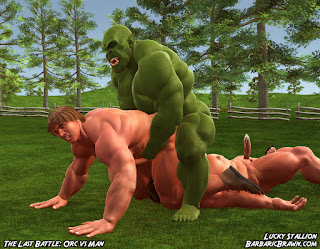 Ra'zug pushed Bryant down from his cock, letting the human's thick, muscular back hit the grassy ground with a thud.  The older man panted deeply, his sight of the sky completely obscured by his son's muscular lower belly and throbbing manhood.  He watched as the short-statured orc moved to mount Joshua's backside, the mammoth cock that was just in his mouth now sliding deep inside the buck's tight hole.  What little Bryant could still comprehend expected his son to cry out in pain, but just the opposite happened.

Bryant watched with a twinge of jealousy as his son was fucked hard and fast by the conqueror of their modest farmstead.  So aroused was the older man, he wanted to lean up and relieve Joshua of that painfully-throbbing erection just above his head.  But his master hadn't ordered him to do such a thing, so he remained still and simply watched. 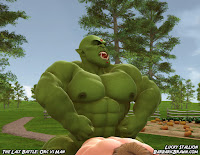 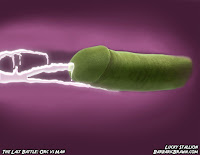 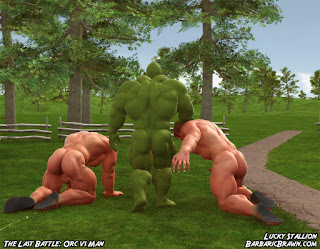 "Nah," the orc denied through a broad grin, grabbing Joshua by the hair and pulling him along as he walked.  He snapped his meaty fingers, ordering Bryant to follow on his hands and knees beside his master.  The middle-aged stud's erect cock wagged and bobbed between his thighs as he crawled, leaking a trail of precum along the way.

"I want yeh both ready ta go again when I get back ta the base we jus' set up nearby.  I want the others ta see yeh hard 'n eager ta be fucked!"

Without looking back at their former home, the pair of men crawled with their master to the new orc encampment not far to the south.  With their pint-sized brother's victory assured, a band of orc warriors would be dispatched to the farmstead to salvage everything of worth and demolish the rest, claiming the land and its resources for Overlord Krag.