The Defiant Prince: Part 3 of 3 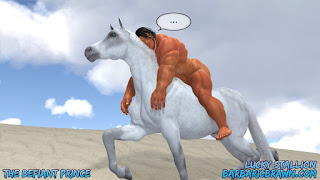 Hassan Fatih, prince of the kingdom of Al Fatih, left his home having rescinded his princedom to protect Lusala and Sahib, his personal bodyguards, from exile.  The gods blessed the young prince that day as he journeyed into the vast, unending desert; the skies above were smattered with clouds that helped protect him from the sun's harsh rays as he made his way southward.

"Africa," Hassan spoke to Zubair, the solid white stallion that was faithfully carrying him into the arid wilderness.  "That'll be our new home, boy.  Lusala told me all about how everything is green and there are all kinds of beasts like the ones Father's seen!"

Hassan suddenly felt a lump in his throat as he thought of his last moments with his father, Asad Fatih.  Their final words had been born out of years of anger, resentment, and sorrow.  But he couldn't go back to mend those wounds this time.  He refused to even consider the possibility that his father had changed his views and would welcome him back home.  He pushed those thoughts from his head and urged Zubair onward.  That part of his life was over and now he would live his life free from the chains of princedom.

Though the clouds brought him protection, the prince began to feel the effects of a lack of water.  In his haste to leave the kingdom, he neglected to bring provisions in the hope that his quest would be over quickly.  The heat of the day quickly sapped his already tired body.  He leaned on Zubair and draped his arms across the stallion's thick neck.  As though knowing what was happening to his master, the horse sped onward, his eyes looking around for any sign of life among the dry sands.

Hassan drifted in and out of consciousness.  He hid his face in Zubair's white mane as his mouth and lips began to dry out.  Before he finally passed out, the last thought that flowed into his mind were of Lusala and Sahib and if he would ever see them again.

Happy Thanksgiving to everyone.  It's the fourth Thursday of November here in the States, so that day of food and togetherness has finally come around once again.

I wanted to say that I'm thankful for my health and the continual happiness that I get from you guys here.  As I'm working to get the Hassan story finished, polished, and posted before the end of the month, I didn't prepare an image for this holiday.  But I do have one that I made as a test back in April of this year. 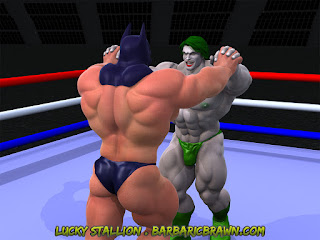 I had updated Batman's and Joker's textures and tried them out with my new lighting to see how they looked.  It isn't meant to be a sign that I'm doing/redoing The New Gotham Champion.  It's just something I thought you guys might enjoy!

Have a great Thanksgiving and keep warm,
-Lucky Stallion

Just wanted to drop a short note saying that I'm still at work on the final part of The Defiant Prince.  It's coming along well and I've decided to devote a little more time to rendering while I write to work out some early problems before I go full-force with the imagery. 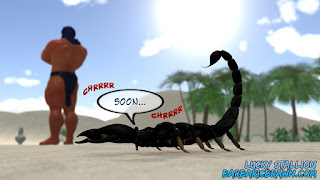 I'm gonna try and keep a deadline of before the end of the month, so keep a look out for it!  And then I'll begin work on my next project. 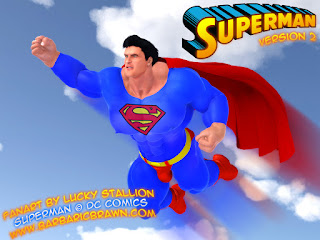 The superstud often mistaken for an avian and/or aircraft flies back to Barbaric Brawn with a refreshed model and a better-fitting cape!

I'd been wanting to update Superman for a long time now, but I never had the time to devote to it.  So, taking a break from my current project, I took a day to work on version 2 of my take on Superman.  There were a few complications with cape and body textures that I finally managed to overcome.  He isn't perfect yet, but he's a step closer to how I want him to be. 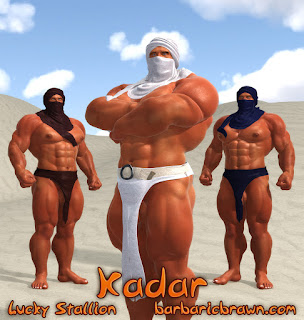 Kadar was a man who lived in Al Fatih for half of his life, having been born and raised in a neighboring kingdom across the vast desert.

Known as the Son of the Ifrit by those whose paths he crossed, Kadar was a man who knew what he wanted and fought hard to get it.  With his every triumph over other men of equal will, Kadar believed more and more that he was the greatest man never born a king.

Narcissism and fear finally drove the people of his birthplace to cast the Son of the Ifrit from their kingdom.  The titanic stud ventured to Al Fatih in hopes of starting a new life.  It was there that he learned that the true power of cunning lay in the virtue of patience.  He would do things differently than before.  He would build his might and make these new people see him for what he truly was: a king.

When the hunt for a new palace guard came from King Fatih himself, Kadar jumped at the chance to cement his accomplishments in his new homeland and take one step closer to building a kingdom of his own.  He would use this opportunity to get close to the great Asad Fatih and learn from him.  Perhaps he would even seduce the king into his bedchambers for a night of lovemaking and domination -- with Kadar on top, of course.

Kadar laughed at his competition.  None among him could possibly stand up to his raw power.  He somehow managed to keep his vanity in check.  Now would not be the time for worship of his muscles.

With his every triumph, the Son of the Ifrit displayed immense admirable quality to the king.  But there were two others who were potential threats to his imminent victory.  A 20-year-old whelp named Sahib and a fool named Amjad.

It was in the hothouse where Amjad would be eliminated, leaving only Sahib and himself as candidates for the position as guard.  With the trial ending in a tie and Kadar still in the lead, Sahib would have to win the next trial to even the score.  Kadar offered Sahib the chance to surrender as he swiped the sweat from his massive pecs, but the foolish youth said nothing and walked away.

That night while in bed, Kadar grabbed hold of his fat cock and pumped the shaft quickly as he thought of his inevitable victory over Sahib.  Before he accepted King Fatih's accolades, he would thrust his manhood into Sahib's upturned butt and breed into him a sense of humility and respect.  Spurting his balls' heavy load all over his chest and belly, Kadar sighed and drifted into a blissful slumber.

That next day, Kadar burned in shame as the nimble Sahib outraced him in the sprint.  He knew of the youth's nickname of Sahib the Swift, but he only considered that his win would be sweeter because of it!  They were tied in points of valor.

Angry and confused, Kadar stood quietly as King Fatih announced the tie-breaking event.  It was to be a contest of resolve.  First to shoot his seed would lose.

Kadar and Sahib stripped nude and down opposite the other, facing his enemy's groin.  At the king's command, both studs engulfed the other's cock and struggled to force his foe to orgasm!

Defeated and devastated with a coating of Sahib's semen on his face, Kadar returned home as the people celebrated their native son's triumph.  The Son of the Ifrit swore vengeance upon the man who cheated him of his dreams of kinghood.  Taking what little possessions he could carry in his bag, Kadar, under the cover of darkness, left that very night and fled the kingdom.

None in the kingdom's town knew what became of the mysterious muscular man.  And though their memories of him began to fade as the moons came and went, the man known as Kadar was somewhere in the sands... waiting for his time to rise again.
Posted by Lucky Stallion at 8:29 PM 15 comments