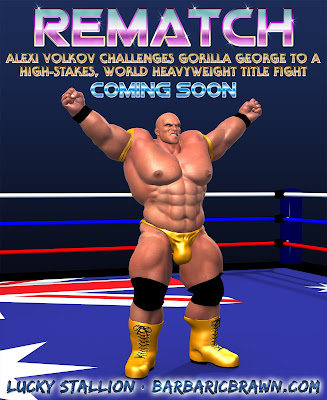 Gorilla George, a powerhouse pro wrestler from Australia, was one of two men to finally defeat the unstoppable Alexi Volkov and his partner Ryan Dermot in a tag team battle witnessed by millions across the world.  The humiliation from that fight has haunted the Soviet wrestler for a year and now he wants revenge.

Gorilla, who has had a very good year ever since his defeat and fuck of the Russian champ, is only happy to oblige the stud's desire to get back in the ring.  But he wants something more.  He not only wants Alexi's ass, he wants that World Heavyweight Championship belt around his waist!

Alexi, as confident and eager as ever, has agreed to put his title and belt on the line and finally take down the one man who managed to plow his butt and bring to an end his restless nights!


I did a bit of body modification on both Gorilla's body and head.  He's a little stockier overall and has slightly less abdominal definition.  I didn't want him to look too different, so I kept a lot of the muscle that my guys now have and just fiddled with his body until it resembled something of a wall of bricks with a bit of added beefiness of his serratus muscles.

I chose to make Gorilla bald after going through all of the hair props I have (which are numerous by now!) and not finding anything satisfactory.  I think he looks a lot better with a shaved head.

After a while of deliberation and going back and forth on it, I decided to make his color scheme burnt gold and black.  And it's a bit hard to tell from so far away, but his eyes are a bright, grassy green color.

I'm at work on the story part of the series, but I wanted to go ahead and create Gorilla today to announce the upcoming story in a visual way.