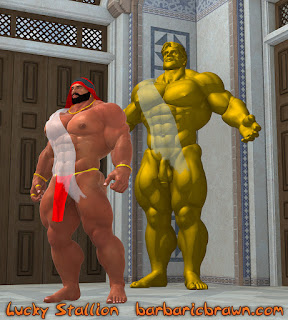 King Asad Fatih, ruler of Al Fatih, stands in the halls of the palace, before a solid gold statue of himself as a much younger man.  A short bit of the statue's origins will be told in Part 2 of The Defiant Prince.  Part 2 is also where King Fatih makes his first appearance.

The king has been mentioned quite a bit -- even in the first version of Hassan I did way back when -- but (aside from his gold jewelry) he's never been seen or described until now.

I envisioned King Fatih to look quite a bit like his son, Hassan, except for somewhat-older facial features and a beard.  The king wears the same style of headpiece and loincloth that Hassan (and the other princes of the palace) wears, except for a diaphanous sash that drapes across his mighty muscular chest and back.

The king's favorite color is (obviously) red, which inspired the name of the Ruby Guard and the red loincloths that that select group of guards wear. 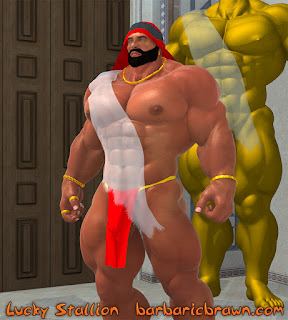 These images turned out a lot nicer than I was hoping for.  Although anything is subject to change, I don't expect much about it to differ from the finished story.

Part 2 of The Defiant Prince is being written now -- it's about... 65% done.  I'm working at it in between decorating and lighting the palace in the studio.  Barring any showstopping problems, I'm estimating I'll have part 2 ready to be posted sometime next week.